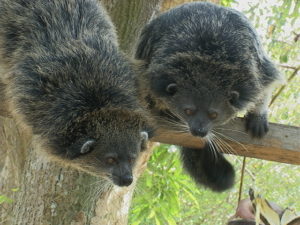 The binturong (Artictis binturong) is summed up by its nickname; the bearcat. With long cat-like whiskers, a long bushy tail, a thick coarse coat and a penchant for living in trees, the species is quite unique. Despite having a fairly wide distribution (the binturong is found in Borneo, Nepal, Java, Northeast India, Bangladesh, Vietnam, Laos, and Thailand), it is rare across its range.

Very little is known about the binturong. It is an omnivorous species and will eat just about anything, although it is said to have a particular affinity for the strangler fig. Their love of the strangler fig also plays an important role for the wider ecosystem as they disperse the seeds, allowing important regrowth. Their long tail can act as a fifth limb, allowing them to move easily through their forest habitat. This strong and sturdy tail is also important as the species is said to mate high up in the trees.  But as for its other behaviour and its wider role in the ecosystem, little else is known.

Across its range, the binturong is threatened  by loss of its habitat due to agricultural expansion, and hunting for the pet market, traditional medicine, and as a food source.

S.P.E.C.I.E.S is currently working to conserve the binturong, and it is one of our focal carnivore species. Information is being gathered on the species to fill in important gaps in our knowledge. Key questions such as how the binturong is affected by the expansion of agriculture and the loss of primary forest, and which areas within its range may act as strongholds for the species. are currently trying to be answered.