The rusty-spotted cat (Prionailurus rubiginosus) is one of the world’s smallest cat species. At a mere 2-4 pounds (1-2 kilograms), it weighs about the same as a couple of bags of sugar. This feline is only found in India, Sri Lanka, and was recently discovered in Nepal. 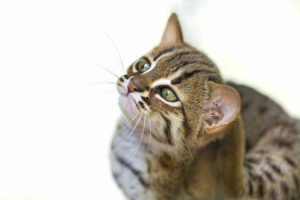 One of the world’s smallest felines, the rusty-spotted cat, is about half the size of a domestic cat. Photo by Tambako the Jaguar/ Flickr CC

It gets its name from the rusty colored spots that cover its grey coat, while its undersides are white with dark spots. This small feline dines on critters in the trees, including rodents, frogs, insects, small birds, and reptiles. The rusty-spotted cat has a limited range, but its habitat is quite diverse. For example, the rusty-spotted cat is found in the rain forest and mountain forest in Sri Lanka, but resides in dense grassland in India. This elusive cat uses the forest and vegetation to stay unseen as it is extremely shy, making it a rare sight indeed. This has made researching and monitoring it an almost impossible task.

As this species is so rare, it is hard to estimate the population size and threats it faces. However, it is known that land fragmentation and heavy agriculture have impacted this species the most. According to the IUCN Red List of threatened species, these threats have pushed this species from Near Threatened in 2015 to its current status of Vulnerable. 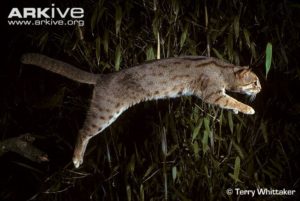 A rusty-spotted cat leaping. For more images of this rare cat see Arkive.org.

The rusty-spotted cat is protected in its range in India, Sri Lanka, and Nepal where hunting and trade is illegal. In order to truly help the future of this species, increasing research and monitoring is the only way to understand the threats to this mysterious wild cat. While it is no larger than a house cat, its role in its ecosystem is much larger, and to save it in the wild we must understand it better and protect its forest home.

S.P.E.C.I.E.S. is undertaking a conservation programme in Sri Lanka with our partner Sri Lanka Wildlife Conservation Society. Learn more about this project here.

Make for the Planet: S.P.E.C.I.E.S. partners with Conservation X Labs