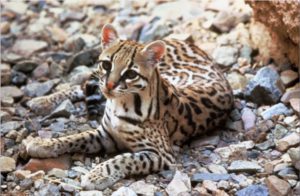 Distributed extensively across the Americas, the ocelot (Leopardus pardalis) is somewhat similar to the bobcat, with fur not too different from the clouded leopard or jaguar. The ocelot likes to live in places with thick vegetation, so they are found in tropical forests, mangroves, and savanna regions.

S.P.E.C.I.E.S works with ocelots on the island of Trinidad where the most isolated population dwells. The Trinidad Ocelot Project is the first effort to study this population, which despite the species’ overall designation as Least Concern by the IUCN, may be in decline due to human activities. The project investigates how human impacts through deforestation, hunting, and urbanization are affecting ocelot habitat suitability.

The Clouded Leopard
Scroll to top