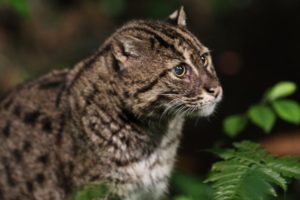 In 2008, the fishing cat (Prionailurus viverrinus) was declared “Endangered” by the IUCN. This was due in part to the extreme lack of records for the species despite wildlife surveys across much of its purported distribution. It is also due to the rapid disappearance of sensitive freshwater and coastal habitats across south Asia. Fishing cats are distributed unevenly across their range, with many populations isolated. Most isolated are those on Java, where the only recognized subspecies of fishing cat occurs more than 2000 km away from the next nearest population .

In the mid-1990’s a survey of otters on Java  recorded signs of fishing cats at a number of locations along the western part of the island. Although the findings of this survey characterized the status of the Javan fishing cat as “critically endangered”, this urgent call for action has been met with silence over the past 20 years, as no specific strategy for protecting the cat has ever emerged.

Given that during this time Java’s coastal ecosystems and wetlands have suffered dramatic changes due to intensive development and a soaring human population, it is imperative that the status of the Javan fishing cat be re-assessed. Its unique genetic and evolutionary context relative to other fishing cats, and the serious threats it faces, likely makes this cat the most endangered on earth.

S.P.E.C.I.E.S plans to conduct the first thorough assessment of the status of the Javan fishing cat, which is probably the most endangered cat in the world.

The first objective is to conduct semi-structured interviews in seven human communities across western Java to assess familiarity with fishing cats and document records. We will also distribute educational brochures to promote public awareness about the uniqueness of Java’s fishing cat, and how to report observations. Based on the results of these interviews, we will conduct sign surveys in potentially suitable habitat to record further evidence of fishing cat presence. We will also identify threats to areas where evidence suggests cats are present, and propose a strategy for their mitigation. Our primary goal is to use the information we collect to assess the Javan fishing cat’s status, and inform the Indonesian government and conservation community as to immediate conservation actions needed.

Rarest cat in the world? Assessing the Status of the Javan Fishing Cat from Experiment on Vimeo.

Albinism in the fishing cat (Prionailarus viverrinus) from the Haor Basin of...

The Western Ghats of India: conserving a biodiversity hotspot
Scroll to top