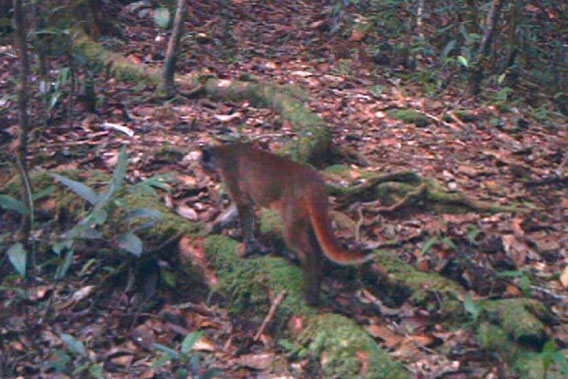 The first image of the elusive Bay Cat in the Borneo Highlands was captured by S.P.E.C.I.E.S founder and director Anthony Giordano, and fellow Panthera grantee Jedediah Brodie, of the University Malaysia Sabah. The species is endemic to the island of Borneo, and is one of the most mysterious and endangered small cats in the wild.

The camera trap footage of the Bay Cat represents the first record of the species in the Pulong Tau National Park in Borneo’s Kelabit Highlands. “Although Borneo’s lowland forests are without question a primary regional conservation concern, we are only beginning to learn the wealth of biodiversity regions harbor,” Giordano told Mongabay in an interview.

Read the full coverage of this story and find the first images of the Bay Cat in Borneo’s highlands at Wild Cat Magazine and Mongabay.

On the prowl: Are there jaguarundis in Big Bend National Park?