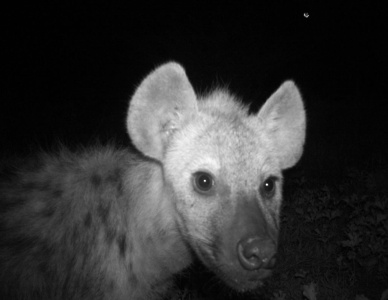 Alysa Hansen, a graduate student at Antioch University, New England, undertook a study in northern Samburu Kenya, with funding and equipment provided by S.P.E.C.I.E.S., to answer an important question; do visual deterrent systems actually work on medium to large-sized carnivores?

The Foxlight is a well-known animal deterrent, developed in Australia and now used around the world. To study whether or not Foxlights were effective, Hansen and a team from Action for Cheetahs in Kenya set up camera traps, Foxlights and repellent tape (which reflect light, move with the wind and make crinkling noises to disturb wildlife) around 15 homesteads in Meibae Community Conservancy.

The 15 homes were divided into a control with no deterrent, those with Foxlights, and those with a combination of Foxlights and repellent tape. 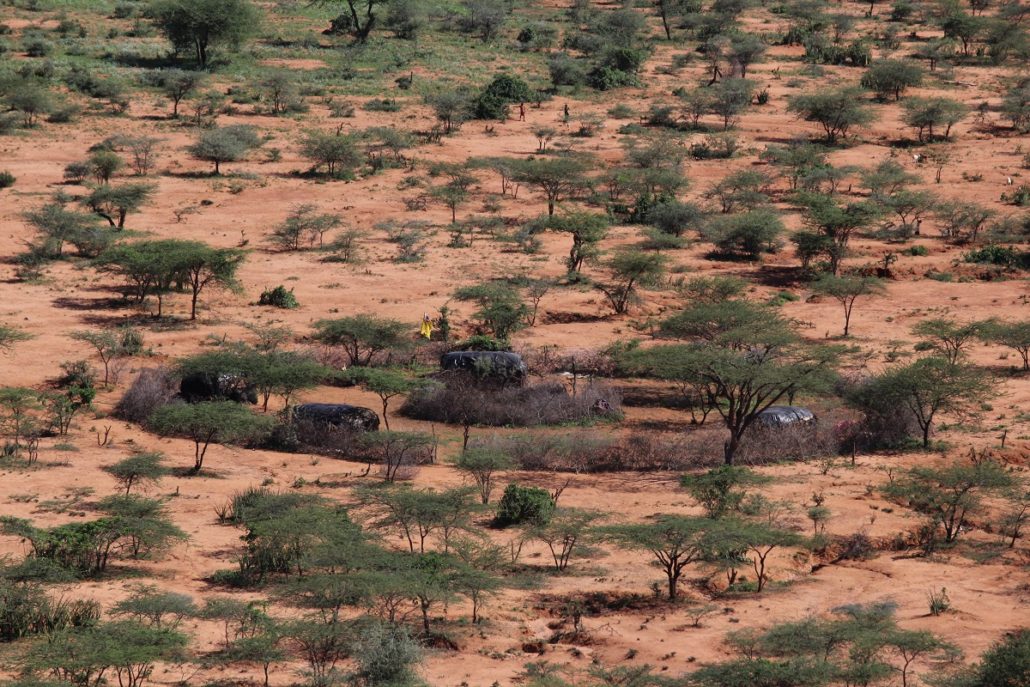 Aerial view of a homestead. In the middle of is a corral or boma that contains livestock at night. Photo by Alysa Hansen/ACK

They hoped to find which combination of deterrents worked best at night, as studies by Action for Cheetahs in Kenya (the NGO with which Alysa worked) had already shown that the large proportion of livestock kills occurred at night.

Human – wildlife conflict is a big problem in northern Kenya, Hansen says, as local people’s lives depend upon their livestock. These people mostly do not want to kill the animals, but there are those in communities who will target carnivores, and not only in retaliation for livestock killings.

Interviews with fifty-four community members reported a total of 710 conflicts with predators in the past year, during which 664 livestock were killed and 46 were injured. Spotted hyena and cheetahs were deemed to be the main culprits behind the attacks by community members. 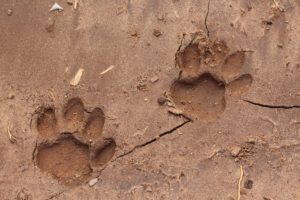 Leopard prints near a homestead. Photo by Alysa Hansen/ ACK

Local community members explained during focus groups that drought and disease kill more livestock than predators, and they also believe that a portion of their livestock is meant for the carnivores anyway. It’s when too many animals are taken that a problem arises and locals become less tolerant of the predators.

Hansen says that local wildlife officials and conservationists alike are trying to instill the idea “that the solution to problems with any animal, whether that is an elephant or a carnivore, isn’t to kill the animal.” The area where she conducted her research used to have a resident lion population, but it was chased out years ago. Now whenever a lion enters the area, it is usually tracked and chased out of the area; people are wary.

Local people do have their own conflict mitigation methods. People employ guard dogs which alert people to the presence of a predator. Livestock are also kept enclosed in fences of thorny bush, but over time this begins to break down and gaps can appear, allowing an opportunity for predators to sneak in. 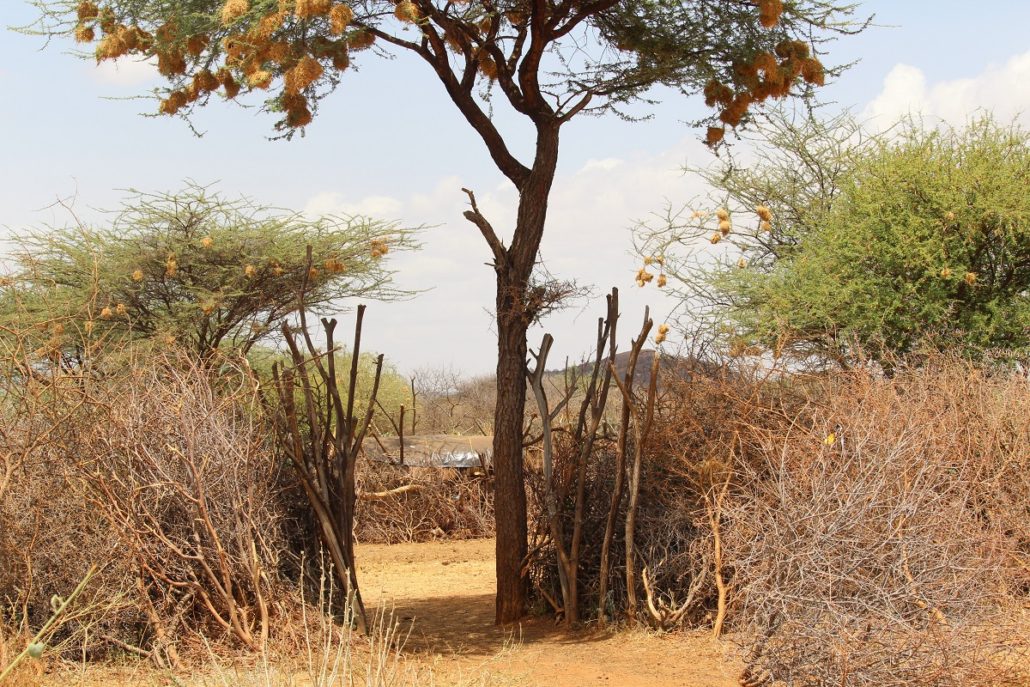 Main entrance to a homestead in Samburu, Kenya. The thorn branch on the right is pulled into the entrance at night and serves as a door. Photo by Alysa Hansen/ACK

Hansen also found that nearly all of respondents to her interviews said they would sell some of their livestock to buy a deterrent system. In a place where people’s lives are tied to their livestock this is no small statement, and makes it essential to understand whether these deterrents work or not.

That’s where technology like the Foxlight comes in, if it reduces the conflict.  By decreasing the frequency of livestock kills, a balance can be struck between the local carnivores and pastoralists.

Bizarrely however, Hansen found that the deterrent actually seemed to attract some predators. “There’s probably two or three homesteads where, it seems to me, there are way more predators visiting,” Hansen said. Amongst the carnivores, spotted hyenas appeared to be the most intrigued, or at least undeterred, by the lights and tape. 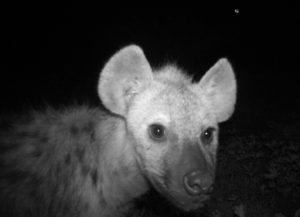 Caught in the act. A spotted hyena near a homestead. Photo by Alysa Hansen/ ACK

But other factors can come into play. Hansen explains that local people believe some of the homesteads in the study area sit directly in a wildlife corridor, where a large density of species can be found. According to local people there are some hills in the area where spotted hyenas and leopards have dens, perhaps also accounting for the high density of carnivores.

There is no certainty that the area falls into a wildlife corridor, but if true it impacts the findings of the study dramatically, Hansen says.

As does the typical behavior of communities, she continues. Among the community members, many toss the bones of slaughtered livestock outside of their fences. Rubbish piles full of rotting food scraps and spoiled milk may not sound particularly appetizing, but to a hungry roaming carnivore like a hyena or a jackal, it’s a paradise.

“One thing we told people in this study is please don’t change anything you do. If you slaughter a goat and throw the bones right outside the fence, please don’t change that,” Hansen says, and explains that, due to cultural reasons, it was not something that could be controlled. During the study there was a traditional wedding at one of the homesteads where numerous livestock were slaughtered and afterwards a lot of predators came to visit.

Hansen concludes that whether the Foxlight is an effective deterrent is a bit up in the air. 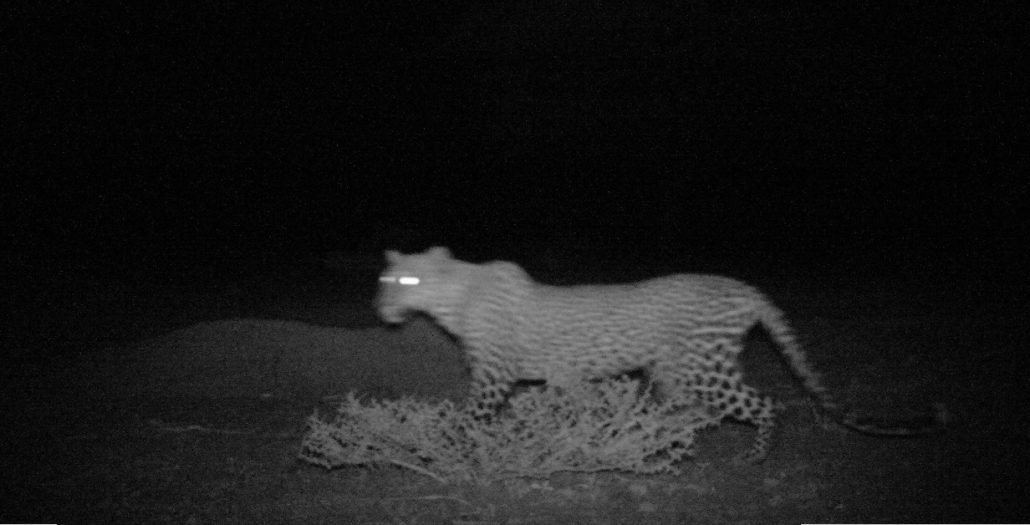 A leopard captured at a homestead with solar Foxlights and Nite Guard Repellent Tape. The leopard was confirmed to have killed two sheep and two goats that night but strangely did not eat them. Photo by Alysa Hansen /ACK

“I had a wonderful experience conducting research in Kenya. Both Action for Cheetahs in Kenya (ACK) and the local community in Meibae Conservancy were very welcoming and were generally excited about the research that was being done,” she says. “There were challenges of course- things never go exactly how you picture, but that’s all part of the learning process. My project would not have been successful without the expertise of ACK’s local field officers and my research assistant.”

She hopes to do more fieldwork in the future while continuing to learn more about human-wildlife conflict. “Now that we have a decent understanding of livestock depredation and its effects on local communities and carnivore populations, we need to focus on practical solutions/ mitigation and understand that what works in one area, may not necessarily work in another.”

As part of our mission to find solutions to human-carnivore conflict, S.P.E.C.I.E.S. partnered with ACK on this project, and provided financial support for Alysa’s work and also supplied her with  camera-traps.   Now these units are with local wildlife officials to be used for future monitoring and research.

S.P.E.C.I.E.S. is a leader in human-carnivore conflict mitigation and partners with many other organizations around the world to help mitigate it. Cameras4Conservation is one of those programs facilitating these unique partnerships.

Ventura man on lifelong journey to save endangered carnivores