The European mink (Mustela lutreola) has a long, slender body with a short tail. The weasel-like mammal is usually dark brown to black, with a thin white patch around the mouth that sometimes continues down the neck. It is this contrasting marking that distinguishes them from the similar American mink (Mustela vison). 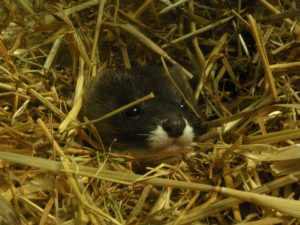 The white markings on the upper lip distinguish the European mink from its American cousin. Photo by EfAston

As a semi-aquatic species, they have a dense, short coat with a water-repellent undercoat to insulate them in the water. Excellent swimmers, their paws are webbed to help them swim, dive, and hunt underwater.

European minks are largely nocturnal, solitary animals. They have a wide range of prey from small mammals, fish, crustaceans, insects and more. They occupy large ranges, always near fresh water. A female mink may stay near a den within her territory, while males venture much farther. 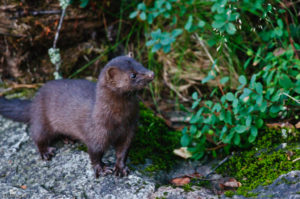 The European mink is one of Europe’s most endangered mammals. In 2011, the species was upgraded from Endangered (EN) to Critically Endangered (CR) on the IUCN Red List. Their range has been reduced by at least 90% since the mid-19th century. The minks suffered from overexploitation for their fur in the early 20th century, leading to a weakened population. In 1926, the larger American mink was introduced to Eastern Europe to be used for its more valuable pelts. The American mink’s presence put great pressure on food and habitat availability, pushing the European mink out of much of its range. Additionally, human expansion and increased land use, as well as hydroelectric developments and water pollution has led to a fragmented population.

Currently, the European mink population exists in isolated regions in Russia, with small introduced subpopulations in France and Spain. Most of these groups are in rapid decline and low density. There are many captive breeding programs working to establish new European mink populations and add new genetic diversity to existing groups. Efforts are being made to restore and designate protected areas and maintain standing ones. 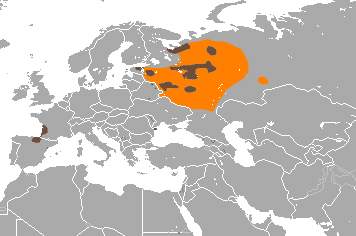 S.P.E.C.I.E.S. presents at UCLA Institute of the Environment and Sustainabi...
Scroll to top