Asiatic wild dogs (Cuon alpinus), or dholes, have a bit of a reputation. They suffer a fate similar to that of wolves in North America; they’re often hunted due to the perception that they are livestock killers. Along with the loss of their natural habitat and disease transmission from domesticated animals, this bad reputation leaves the dhole endangered in the wild. 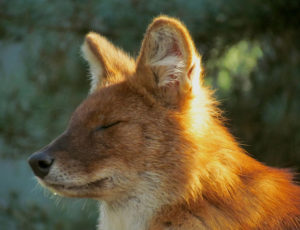 A dhole rests in the sunshine. Photo by Ozzy Delaney, Flickr CC.

Despite their diminutive size, dholes are smaller than medium-sized dogs, they can take down prey that is up to 50 times their weight, such as samba deer or boar. They are pack animals and hunt prey in groups of five to ten, although their numbers were said to reach beyond 50 in the past.

Adults’ coats are a reddish-brown colour with a bushy, black tail, while their pups are born a dusty black colour, taking the colour of their parents once they are three months old.

Living in places that are inhabited by bigger, stronger predators such as tigers and leopards, the dhole has come to hunt effectively as a pack. Scouts will lead the way while the main pack follows up and takes down the prey. Dholes do not suffocate their prey with a vice-like grip like tigers do, rather they take bites, bring it down, and begin eating immediately, often while their prey is still alive.

In this video you can watch as a tiger attacks a pack of dholes. Tiny in comparison to the tiger, the dholes skip lithely away and appear to come back to pester it. Dholes are sometimes killed by tigers, and historical reports suggest that tigers have been killed by dholes, although this has never been confirmed.

There are between 4,500 – 10,500 dholes in the wild; only around 2,000 of these are mature individuals capable of breeding. They are understudied and largely unknown, even in the conservation world. But they are known to use many different ways of communicating and make use of a highly distinctive whistle as a way of gathering their pack in the forest areas they call home.

S.P.E.C.I.E.S., through its Western Ghats Conservation Project, is working to conserve the dhole in India. The project aims to identify the main threats to their survival in the Western Ghats, along with tiger and leopard populations. Once these threats are identified, conservation action will be taken through community-awareness and human-wildlife conflict mitigation efforts.

S.P.E.C.I.E.S. celebrates the International Day of the Snow Leopard