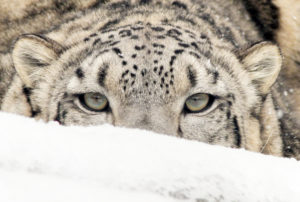 Native to the high mountains of Central Asia, the snow leopard (Panthera uncia) is as elusive as it is beautiful. Its white-grey and spotted coat blends perfectly with the snowy environment it calls home. Built with powerful hind legs, snow leopards can leap six-times the length of its body and traverse its steep landscape easily.

Globally, there are only around 4,000 snow leopards left in the wild. These enigmatic cats are frequently killed in retribution for attacks on wildlife. Their habitat used to be filled with their natural prey that includes bharal, blue sheep, ibex and marmots, but competition with agriculture has led to declines of their prey. Because of this, snow leopards now prey on domestic livestock, and in some areas, domestic animals make up 60% of their diet.

Between 200 and 450 snow leopards are lost every year due to retaliatory killings. Other threats to their survival include hunting for the wildlife trade, where their furs are highly sought after, and their bones, teeth, and claws are used for traditional medicine.

Snow leopards are found in 12 countries: Afghanistan, Bhutan, China, India, Kazakhstan, Kyrgyzstan, Mongolia, Nepal, Pakistan, Russia, Tajikistan, and Uzbekistan. Conservation efforts are underway across their range, but a lack of cross-border cooperation is cited as a hurdle to ensuring the species’ survival.

In Nepal, snow leopards inhabit an area approximately 13,000 km2 in size. The Api Nampa Conservation Area, in the west of the country, may provide an important location for conserving the species as the area acts as a corridor, connecting populations in India and Southern China. 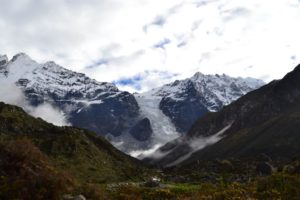 A typical Snow leopard habitat in the Langtang National Park with Langtang glacier in the back drop.

Gaining critical information about the Api Nampa population will allow high human-leopard conflict areas to be mapped and conservation strategies developed to reduce this conflict. You can help us conserve this crucial snow leopard population by making a donation today.