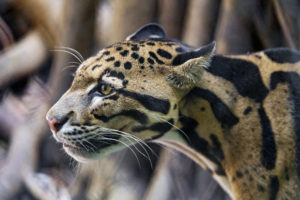 Photo by Tambako the Jaguar/ FlickrCC

The clouded leopard (Neofelis nebulosa) is one of nature’s shyest creatures. The smallest of the big cats, they prefer to remain hidden and out of sight. This presents significant challenges when studying the species, and as a result, much of their behaviour remains a mystery.

Their range includes the Himalayan foothills of Nepal, into Southeast Asia and China, and a population exists in the southeastern parts of Bangladesh. There is also a separate species, the Sunda clouded leopard (Neofelis diardi), found only on the islands of Sumatra and Borneo. Both species are considered vulnerable to extinction by the IUCN.

Deforestation and the wildlife trade present the greatest threats to the clouded leopard. They prefer closed forest and dwell mostly in primary, undisturbed forest, although they have been found in secondary forest in some locations. Forest areas where they are found are currently facing some of the fastest rates of deforestation around the world. They are also hunted for their body parts and uniquely patterned coat, which is covered in distinctive cloud-like markings.

Ecology and status of the jaguarundi (Puma yagouroundi): A synthesis of existing...
Scroll to top